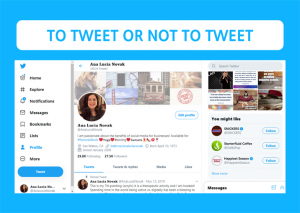 So many people have said they are going to leave Twitter, or not use Twitter, and that it’s just not relevant anymore for them. But, the truth is, it’s not Twitter that’s the problem, it’s the users that are the problem. There is too much automation. Remember, social media is for engagement, and people who use Twitter for that purpose see great success. It’s those who have resorted to too much automation that have problems.

Twitter is still a formidable social media outlet that small businesses should continue to use for the near and far future. There are many reasons for that, such as:

* Twitter is still informative – Compared to other social networks, it’s still easier to find information about groups, causes, and businesses via Twitter search. Hashtags make it easy to compile the information, and important people are still having important conversations on Twitter.

* You can engage with anyone – Due to the way Twitter works, you can potentially connect with anyone whether you follow them or not, and vice versa. Due to the ease of sharing and the ease of tagging people, before you know it you could be in a conversation with someone famous or at least famous in your group.

* It’s very responsive – Using Twitter on mobile devices is still easier than using other social media on mobile devices. There is still a lot you can’t do with mobile on Facebook that you can do with Twitter.

* Search is easier – It’s so easy to filter out the things you don’t want to see. You can look at only tweets for a particular topic which makes finding trends super fast and easy. You can easily study your audience and potential audience on Twitter.

Due to these factors, it’s important for small businesses to realize that Twitter is still a useful tool for engagement, research, and promotion. You just have to do it right. If you are having issues with getting results from Twitter, you’re doing it wrong.

Tweet about what you’re doing right now, and ask your employees and your contractors to do this as well. Make it relevant to your audience. For instance, if you’re working on a new eBook, say so. “5000 words down on my new eBook!” is a great example of a tweet that will get attention of your audience, and likely some “congratulations tweets” too. What fabulous interaction, from just a simple update that you can capitalize on.

Your Twitter followers not only care about your day and what you’re doing – enough to read your tweets and correspond about them, they’ll also be happy if you share anything profound from other tweets of people who you follow. Sharing, commenting, and engaging are all important aspects of being on Twitter. Without those three things you won’t be successful. So, ditch the automation, and use Twitter for all it’s worth, because it is still very relevant in social media marketing today.